Organized a visit to Glengavel for a celebrity angler recently the “Hillend Dabbler” who writes a great blog – The Hillend Dabbler.

Please read his post below & check out on his Blog page – all i can say is well done Allan!!!

Thanks also for letting us use your photos and words in this post. 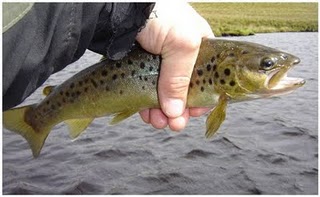 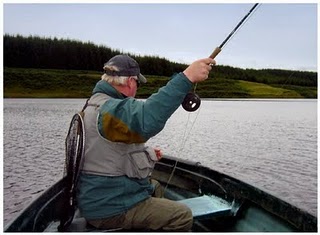 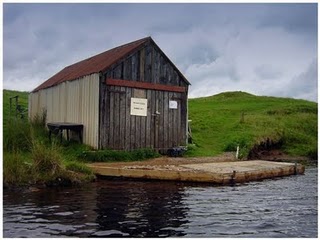 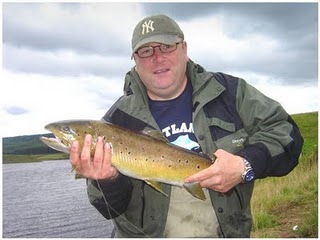 Hillend Dabbler with his Cracking Broonie.

I had wanted to visit Glengavel reservoir for a few weeks now ever since I came across the Upper Avon Angling Association web site and got in contact with their Club Secretary, Alby.
As my holiday from work was rapidly running out I decided to have a visit there today. After a quick breakfast I was on my way through the Lanarkshire roads in the mist. By the time I reached the Garrion Brig the mist had lifted and the sun was shining. I was soon in Stonehouse where I arranged to pick up my permit etc from Jim a committee member. After a wee chat with Jim about Glengavel and fishing in general etc I was on my way to my destination. On arrival noticed I was the only angler at the reservoir but as I setting up my rod another angler arrived, his name was Alan too, we got chatting, we then went to the fishing hut and signed in the book as per club rules. I decided to start fishing just to the right of the fishing hut and boat moorings as advised. Very soon I raised a fish to the Kate McLaren which I had on the top dropper but it didn’t stick. Alan then told me he raised a couple of fish too. He then asked me if I fancied going out on the boat for an hour or two. I happily agreed. Off we went away down to the far side of the reservoir to try and find an area that was less windy as the breeze had whipped up a bit. We eventually found a decent drift but the wind meant we had to adjust the boat regularly. Alan was first into a fish a nice fish of 3/4 of a pound, which he caught on a Klinkhammer fly. We fished on I was still using my wets which were a Magpie and silver on the point and my ever dependable and faithful Kate, on top [oo err missus]
Every now and again I was getting takes but I kept on missing them, then eventually there was a splash at my Kate and this time it was on. After a feisty fight I landed a trout of ¾ of a pound. After a quick pic I released him back to his natural habitat. Time was getting on and Alan had to leave to collect his kids from school so after rowing back down to the fishing hut. We said our goodbyes and I thanked him for taking me out on the boat.
I decided to take a break and have lunch. Then after having a wander around taking photos I decided to try for some trout again. I opted to fish down into the wee bay from the fishing hut and waded out up to about my waist. I wasn’t fishing very long when I got a very ferocious take, this felt good. A great struggle ensued as I tried to gain some semblance of control. As I was starting to get the upper hand with this fish another Glengavel angler arrived and watched me bring this fantastic fish to the shore.
He remarked that this was a beauty and estimated it to be around the 5lb mark at least. He assisted me with his net and I brought the fish ashore and found that this big broonie had been fooled by my ever-faithful companion, Katey once again. After a quick photo shoot with me and the fish I released the bigyin back to whence he came. The Glengavel Regular [I never caught his name] shook my hand and congratulated me and was soon off looking for trout.
I decided to stop fishing and just sit back and enjoy the moment and satisfaction that every angler experiences after such a fish. I could have packed up there and then, I was that contented. After a quarter of an hour or so I headed for the Sandy Bay but casting was difficult in the ever-increasing wind. No further action occurred so I made my way back to the hut to sign out, but before doing so I had a few final casts near the hut. As I packed up I reflected on a very satisfying day out at Glengavel. The fishing was great but what pleased me more than anything was the genuine friendliness and hospitality of everyone I met today… Jim, Alan and The unknown angler. I would also like to thank Alby who I have only met and spoke to “virtually” on the net, who arranged everything for me. Thank you very much, I had a fantastic day.

One Response to Hillend Dabbler – cracks Glengavel with Monster Broonie!!!